The World’s Most Remote Launderette 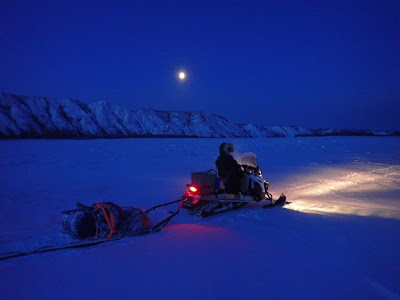 The Yukon is unfolding into springtime. It was -35C this morning but there is light in the sky when I wake at 7. Only a few weeks ago it was pitch black until 10am but we gain 7 minutes of light each day. The change is so fast it spins you off balance and soon, instead of falling asleep once I’ve eaten dinner, I will have “evenings.” What to do with them? 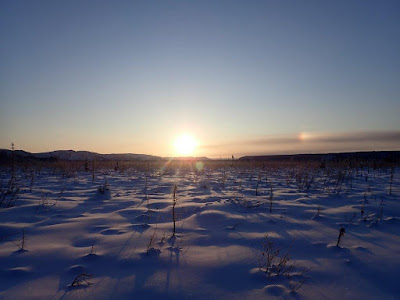 Suicide or domestic violence, there’s two options. I recently learned that whilst many people threaten self-harm or abuse in mid-winter, they lack the energy. They don’t get round to it ‘til spring.


However, Neil is working away for 10 days so there is no one to thump and I’m feeling too cheerful for suicide. I’m basking in a sense of fulfilment at having taken a 470 mile journey through the vast and empty Yukon wilderness to visit the world’s most remote launderette. Despite the fact we forgot our laundry. 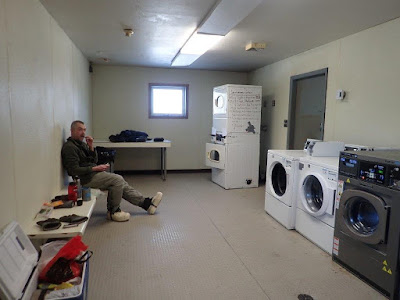 We made our voyage to Circle, following the route of the Yukon Quest dogsled race that runs for 1000 miles between Fairbanks, Alaska and Whitehorse, YT. It was the longest distance we have ever driven by Skidoo, and the farthest we have ever been from help. After visiting old friends, we filled up with gas in Eagle, the last conurbation before Circle, 160 miles downriver.


Dwellings and homesteads peter out past Eagle and for 130 miles, we were entirely alone in the empty, white wild. Or almost. 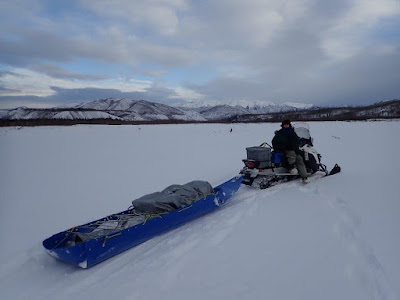 Stopping to warm up at a public use cabin at the Kandik River, we found someone we knew. I quickly made it clear we were only stopping for tea. He was relieved, and I know exactly how he felt. 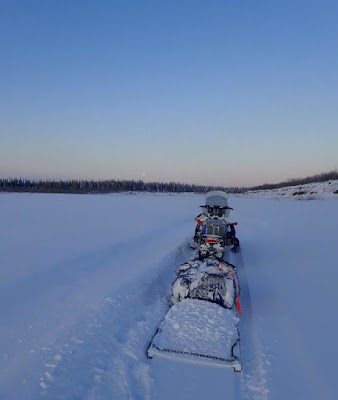 His hermitage had already been interrupted by some ski-tourists. We would meet them at the next cabin along the trail that night, he told us, where we planned to stay. So much for solitude. 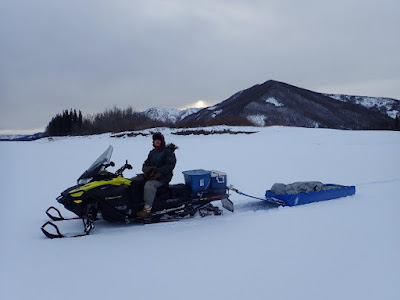 The skiers had stayed at people’s homesteads on the way, turning up unannounced, needing dinner, a place to sleep and breakfast. Everyone spoke graciously of them, but I know how hard it is to get supplies when you live in the bush, and how little money people have. A pack of bacon, a wee dram of whisky or an offer to collect mail is a nice gesture, even if means more weight in the backpack. 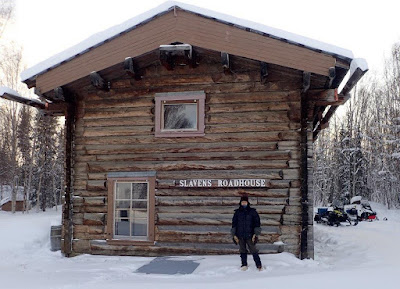 We planned to stay at Slavens Roadhouse and then make a long daytrip to Circle as there is nowhere to stay in the town. Built in 1932, Slavens is now a public use cabin, 60 miles along the Quest trail from Circle but was once a roadhouse for the traffic that ploughed up and down the river.


There are two buildings, so we settled into the old roadhouse whilst the skiers, whom we met en route, chose the warmer, more modern cabin. I think they deserved it after a cold day’s skiing, and I didn’t envy them one bit.

We were all snowed-in the next day by a raging blizzard that ate up the trail and frightened the skiers into calling for a weather report on their Inreach satellite devices. 40 below, maybe -50 weather coming, they told us and looked worried. 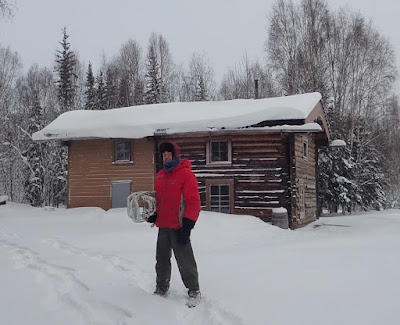 Wisely, they decided to bail out and charter a plane to collect them from an airstrip behind the Roadhouse. We wondered too whether to push on for Circle? 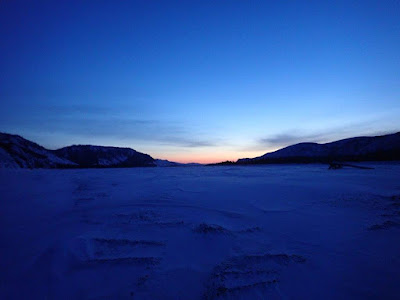 The following morning it was indeed -44C. The trail was obliterated by 6 inches of snow. Our sleds had disappeared, and I fell over one trying to find it. But we knew we could follow the Quest stakes that mark the route, and a full moon beamed down on us as if to say- Go for it. 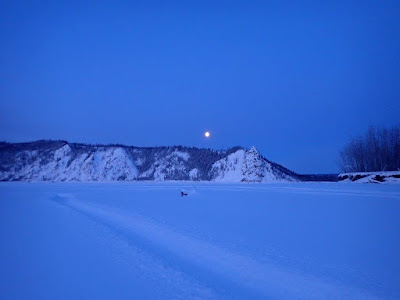 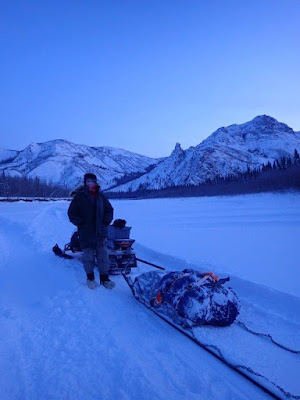 Heading downstream and north on the Yukon River, the mountains drop away into the distance and the sky takes over. The land feels ancient, ground by millennia of ice and cold and still deeply, deeply frozen. 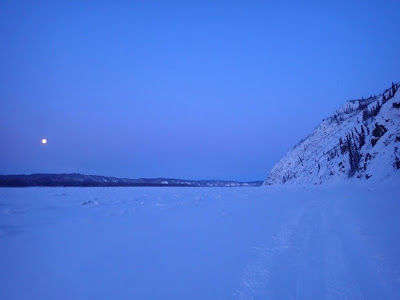 The feeling of space and freedom is almost overwhelming. Without the hills that bound our horizon here, I had a sense of the epic breadth of boreal forest and tundra in which our little homestead sits, and across which we scurry on our tiny machines. 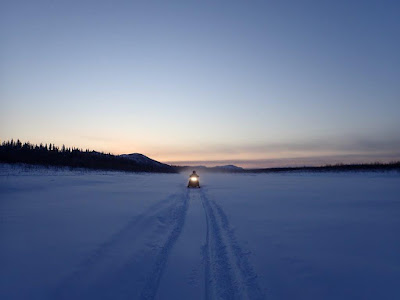 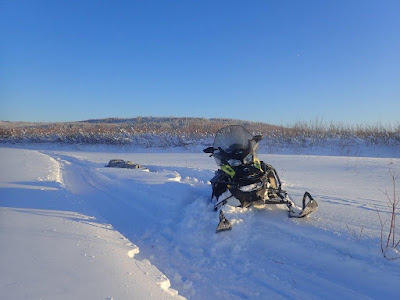 We had gone so far that we could not turn round, as we had to buy more gas to get home. I had the miserable feeling we’d have to unpack our tent and camp at 50 below. But then, past the next slough we saw- Circle! No hang on, is it just a derelict building? There’s nothing there, we thought. 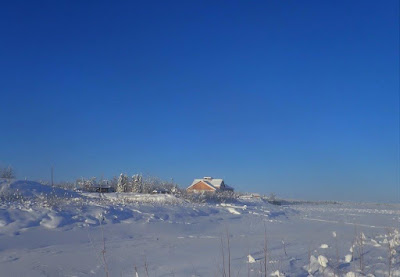 Circle, population 104, is so named as the first miners to settle there thought they had reached the Arctic Circle. They hadn’t. The Arctic Circle is 50 miles north. Similarly, we thought we’d find a small town but Circle seemed merely a collection of empty buildings, sitting under an unimaginable expanse of deep blue sky. 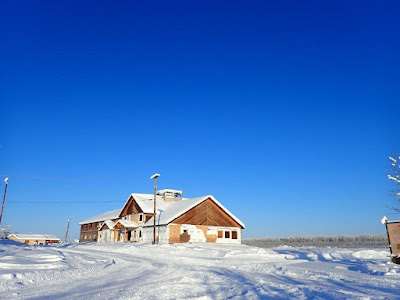 The town marks the beginning of the Yukon flats. The horizon drops to your ankles and all we could see was blue.

From the boat landing at the front of the town, I felt as if I could sky dive out and soar upwards rather than plummet down. It is the most noticeable, overriding and all-consuming feature of the place and in my memory all I see is a few buildings clinging to the edge of the firmament.

The gas station and store were shut, though the owner kindly drove over and sold us some gas. There was nowhere else except the health centre, a beautifully equipped, entirely empty building. Empty aside from a friendly woman waiting, I presume, for the spring onslaught of corpses and mutilated bodies. 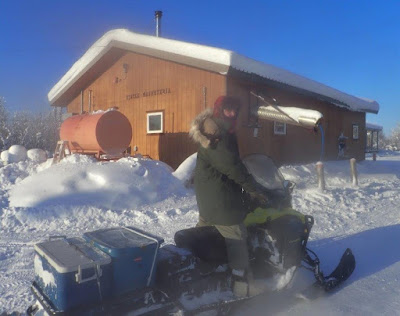 We went into the only other public building we could find. The Washeteria, and cursed ourselves for not driving 230 miles with the laundry. It was warm, there were toilets, there was even a shower if we’d had towels. 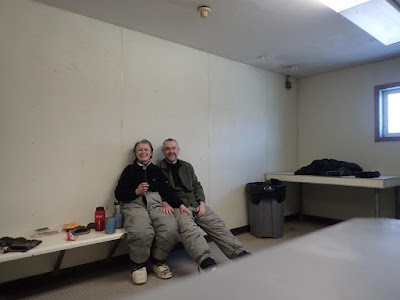 So we had a lovely picnic of frozen cheese, dried meat and chocolate cream cookies in front of the empty washing machines in that odd, vacant town that was not at the Arctic Circle but seemed to float in the sky. 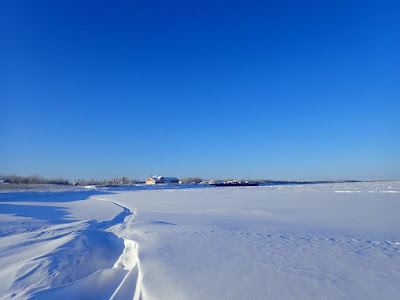 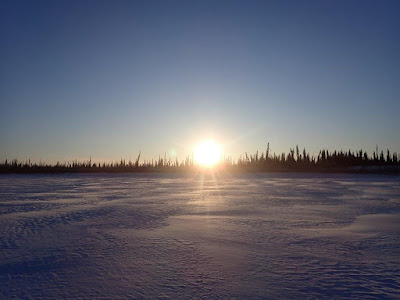 By the time we got back, after a 40 below, 14-hour day, my arms and shoulders ached so much I couldn’t even feel whether I was cold, but I didn’t care. We’d made it. So much beauty, so much space and all for us alone, it seemed. The skiers had gone. Whisked away by private charter plane. 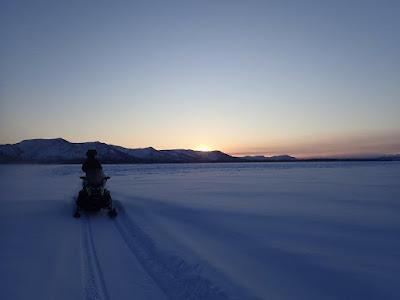 We got a message on our satellite device that the fellow at the Kandik cabin could not start his machine. The next day, we met another pal there and were able to get him, his Skidoo and sled to a homestead near Eagle and safety.

We were pleased to help and to be reminded that, annoying as other people may be, it’s good to have them around. It could easily have been us that needed rescuing, and it often is.

Our dog, Homer, came halfway with us and then had a happy holiday of his own in our friend’s dog yard with his parents and siblings all around him. 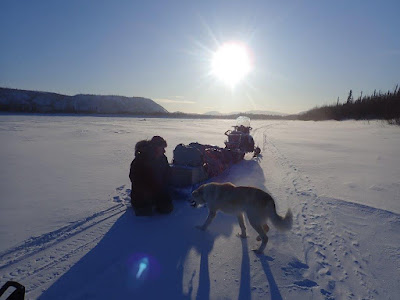 We all had so much fun I’m wondering if we might now plan a tour of the world’s most remote laundries. We could take our washing and lots of change. 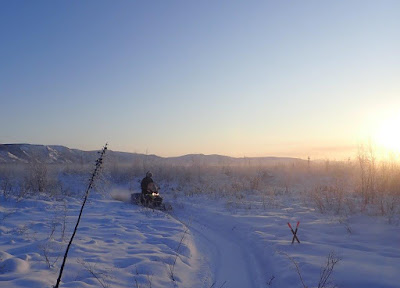 When you have to haul your water from the creek and wash everything by hand, a Washeteria is an exciting prospect in itself. Perhaps for our next trip, I’ll going to extend the rule book beyond the famous “leave no trace”. 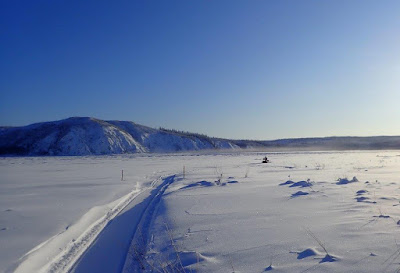 How about- leave no trace, bring some gifts, and don’t forget your laundry? 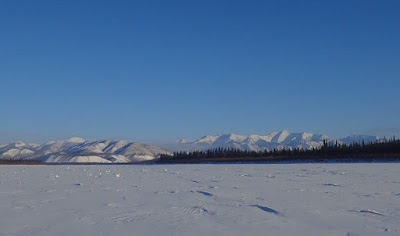 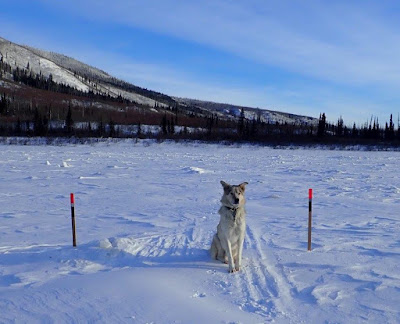 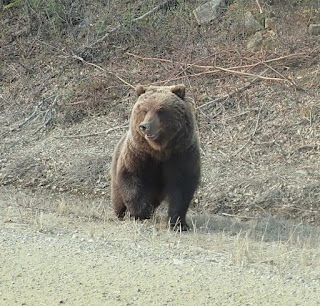 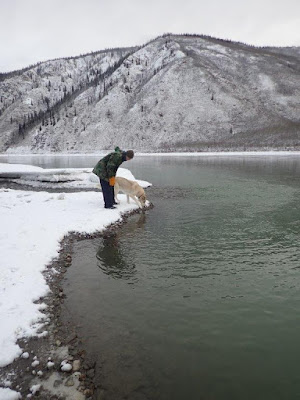 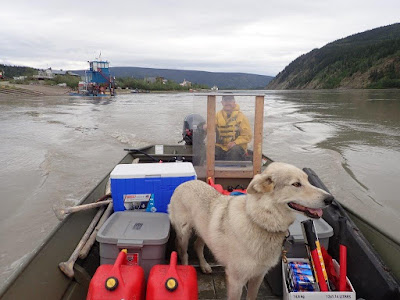 We’ve been out for 6 weeks and in that time the forest has sprung up, fast as a million beanstalks from a million magic beans, and engulfed our home almost beneath it.

The last of our raspberries are moulding on the stems and so we dashed out the morning after we arrived to pick as many as we could for jam. We’ve start…
Read more