Showing posts from May, 2018
Show All

Behind the ice wall 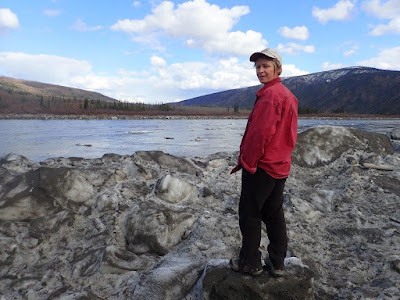 The river broke up on May 9th. After weeks of watching and waiting it tried to sneak out on us when we were in bed.

Luckily Neil’s bladder isn’t all that and he had to get up at 4am for a pee. “The river’s breaking up!” he shouted as he ran back in. You know when you’d just rather be asleep? “Oh for heaven’s sake,” I said putting on my wellies and grabbing the camera. We have 24 hour daylight now, as far as I can tell, so at least we were able to see it and film it.

Here’s a very exciting compilation from the moment Neil ran back out the door into the yard, to later the next day when there must have been a jam upriver and it cleared for a bit. There is some foul mouthed and inarticulate 4am commentary from us to enjoy too (“Wow! Look!” etc)

Perhaps because break up happened late in the year and the ice was beginning to rot, it seemed to flow out in one smooth rush.

It was all rather leisurely as we sipped our morning coffee, perched on camping chairs on the bank, and watched it go …
2 comments
Read more 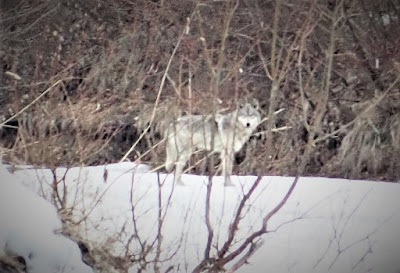 It’s hard to find ways to celebrate special occasions in the bush. You can’t go for a meal or buy some cheap prosecco and get shit faced. It was our wedding anniversary on Saturday.

We’d saved 4 cans of beer but what else to do? The best we came up with was finishing the scribed log kennel we are making for our dog. It didn’t promise to be very romantic but suddenly, between the chainsawing and the swearing, a wolf howled from across the valley.

After each howl an echo rang from the hills and hung in the air. He was joined by his friend from the bottom of our ramp, and another on the creek behind us. They were so damn close, we ran over to try to record them, but as soon as I turned the Go-Pro on, they’d stop.


It was like playing grandmother’s footsteps. Every time I turned it off and walked back to work, they’d howl, we’d dash back and they’d stop again. Bastards. We ignored them in the end and went back to sawing logs until this-


This wolf was so close, my hair stood on end. It i…
6 comments
Read more
More posts